TIL - Underneath the Docker Desktop

This is how I came about learning this.

On a rare sunny afternoon in forever-raining-everyday Singapore, I happen to read OCaml 5.0 Multicore is out on HN. Wait, OCaml is still alive and thriving ? Very nice!

One of the comments mentioned this What is an Operating System? podcast from JaneStreet. As an impulsive monkey that I am, I proceed to listen to that on a very long bus ride from one end of Singapore to another. (I highly recommend to check it out! Although I barely understood most of stuff, it is great. You trust me on this one.)

One of the projects mentioned in this podcast is called MirageOS. A modular library OS written in OCaml. From there, I learned that MirageOS libraries empower Docker Desktop. Holy Cannoli! How is this not very cool ??

Anyway, the TLDR is that

From The Magic Behind the Scenes of Docker Desktop | Docker

What the heck is LinuxKit ?

It is a toolkit for building secure, portable and lean operating systems for containers.

Basically, you can use it to build a custom kernel/OS yourself with minimum dependencies. Then you can boot it up on the cloud VMs or your local VMs. Very flexible and customizable.

For example, this is how an OS with only Redis running inside, plus only the required permissions.

Source from redis-os. Download linuxkit. Save it to a file, run a few command and you can boot it up!

Found a neat guide at Build custom OS by LinuxKit as well.

Next component is this vpnkit thing.

VPNKit creates a virtual network interface on the host machine and assigns IP addresses to each of the connected virtual machines or containers. This allows the virtual machines and containers to communicate with each other as if they were on the same physical network, even though they may be running on different physical machines or in different locations. Also written in OCaml and you bet it’s built on top of the network protocol libraries of the MirageOS. 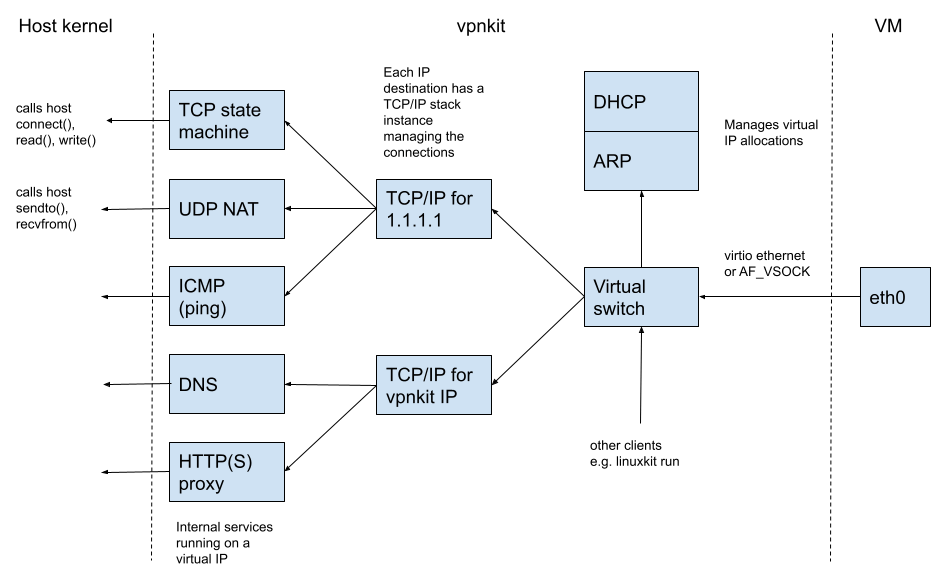 From How Docker Desktop Networking Works Under the Hood. Also highly recommended to check it out.

Now that I’ve learned a little bit about MirageOS/Docker, I will traverse upward and learn more about OCaml next time!